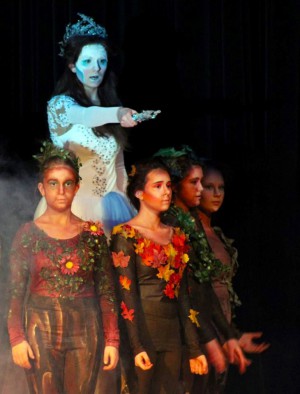 The Holy Trinity CSS Arts Department will be travelling to Hamilton to participate in the Sears Drama Festival. Holy Trinity’s play, “The Lion, the Witch and the Wardrobe” is an adaptation of the C.S. Lewis book. The play has been selected to perform at the Provincial Showcase to be held at Sir John A. Macdonald High School in Hamilton, from May 6- 9.

The week long festival includes performances by the 12 best schools across the province, as well as workshops run by industry professionals and social events for the students.

Holy Trinity has been working on this performance since last May and is reaping the benefits of their hard work. The play includes original music, dance, special effects, pyrotechnics and fight choreography, that helps bring the world of Narnia to life.

The Sears Drama Festival, an annual one-act play festival in its 69th year, is an opportunity for drama and arts students to develop their stagecraft skills and compete with other schools around the province. There are three levels to the festival: the district level, the regional level and the provincial level.