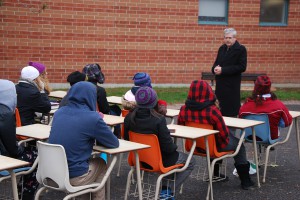 Students at St. John Catholic High School in Perth participated in a day of awareness around Shannen’s Dream, a campaign to raise awareness about inequitable funding for First Nations children. Visited by MP Charlie Angus, an advocate for the student and youth focused campaign, students learned about the issue of education in First Nations communities across Canada. Students from the Justice Action Committee (JAC) spent the day going to class outside in the cold, in solidarity with our First Nations youth who go without proper school facilities on a daily basis. The sight of these students outside at desks helped raise many questions, great discussion, and hopefully some deeper awareness among the school community about the inequities and challenges faced by First Nations students.

As part of the day’s events, the school also raised funds for Shannen’s Dream by dressing down and through the sponsorship of those students committed enough to brave the cold for a full day of school outside. In the end, the St. John Catholic High School community raised just over $1,300 for Shannen’s Dream.

Shannen’s Dream was formed by the First Nations Child and Family Caring Society of Canada in memory of youth education advocate Shannen Koostachin, from the Attawapiskat First Nation in Ontario. At the young age of 14, Shannen began to work tirelessly to try to convince the Federal government to give First Nations children a proper education, before tragically passing away at the age of 15, in 2010. The campaign, named in her memory, engages Aboriginal and non-Aboriginal peoples to better understand the education inequities and to take action to ensure all First Nations children and young people attend good schools and receive a proper education. First Nations schools receive less funding per student than Provincial and Territorial schools, and zero dollars for things like libraries, computers, languages or extracurricular activities. In addition, many school facilities are plagued by serious health concerns such as black mould contamination, high carbon dioxide levels, and unheated portables. 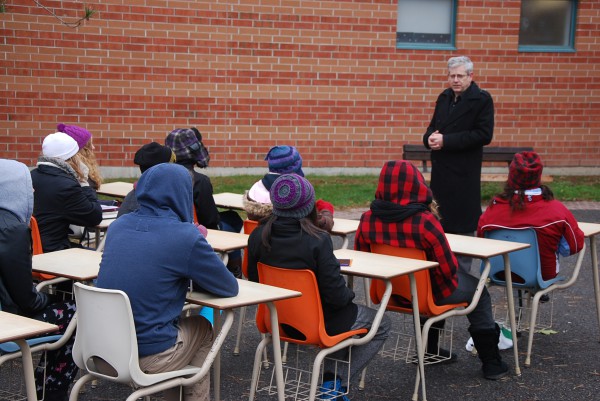