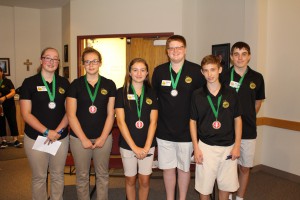 A group of ten students from St. Thomas Aquinas CHS, known as the AVENGERS (A Very Energetic Nerdy Group of Environmentally Responsible Students), have been working very hard on an innovative environmental project, in conjunction with teacher coaches Ann Jackson, Blair Fitzsimons, and Brad Reid. YAY-BALE was created in response to the First Lego League (FLL) annual competition, which challenges students to develop solutions to real-world problems. This year’s challenge was called “Trash Trek,” whereby students had to develop a solution to a problem involving trash.
The group of grade 8 and 9 students presented their project, which has been named YAY-BALE, to the Board of Trustees, and discussed how the project has evolved, along with a few of their amazing accomplishments.

In speaking with local farmers and travelling to Lafleche Recycling Facility, the AVENGERS learned that plastic hay bale wrap and bunker plastic is a huge environmental problem. Rather than trying to find different ways to recycle the oil based plastic, students decided to look at ways that plastic could be made from starch, rather than fossil fuels. Through consultation with many different organizations about the issue, the group has developed an alternate product, along with a business model of how the product could be brought into production.

“We wanted to make sure our product stood up to the environmental elements. We had to create a business model, and create a pitch for our product,” explained team member Noah Hill.
The newly developed plastic, which is both strong and completely biodegradable, was presented, along with the team’s business model, at the FLL Global Innovation Awards on February 27 in Toronto, and the group moved on to become semi-finalists in the 2016 Trash Trek in Washington, in June.

At the global challenge, the group was one of the top 20 teams of 30,000 that applied to enter the competition. Teams were from all over the world, including Germany, the US, Canada, and Spain were in attendance.

The success of the project has resulted in some amazing opportunities for the group, who have received notable media attention, as well as the opportunity to present their project to the Honorable Catherine McKenna, Minister of Environment and Climate Change, and to the Agricultural Attaches at the Canadian Embassy in Washington.

The group also had the opportunity to present their idea to Sean Wise, a Canadian mentor capitalist and consultant for CBC’s Dragon’s Den.

“After our meeting with Sean Wise, we were approached by a lawyer to see if we wanted to patent our product,” noted Noah Hill. “The lawyer did our patent work pro bono, and we are in the process of attaining a patent on our project.”

Moving forward, the group is preparing for a few scheduled media features in the coming months, and has been approached by several companies interested in helping them bring the product to market. 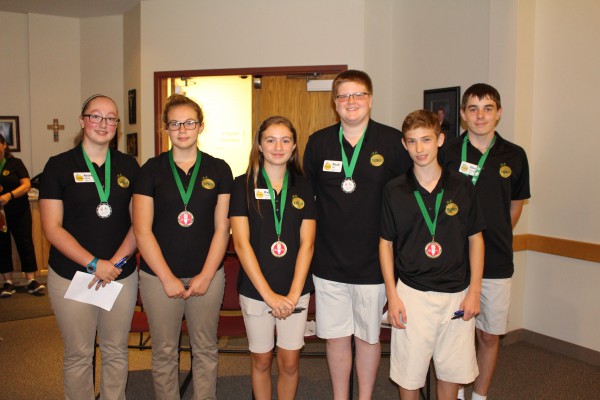