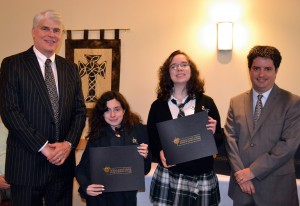 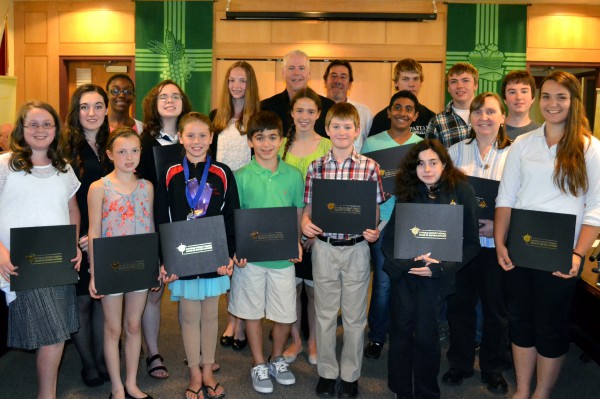 Each year, the CDSBEO honours deserving students and staff through the presentation of Certificates of Appreciation. Awarded to remarkable persons with outstanding successes, the certificates were presented to nineteen students at the June 17th Board meeting. The following are this year’s award recipients pictured with Director of Education, Wm. J. Gartland (left) and Board Chair, Brent Laton (right):

The Youth Ambassadors Program, sponsored by Fulbright Canada, selected seventeen Canadian recipients to participate in a three week international ambassadors program. Students completed an application package, and competed with applicants across Canada to be selected to participate in this prestigious program.

Sequoia is a very dedicated student who works diligently in all that she does. Sequoia also studies dance a minimum of eleven hours per week at Ecole de Danse Powell School of Dance. On March 1st and 2nd, Sequoia travelled to Toronto to compete in the Star Catcher’s Dance Festival, where she earned High Gold, First Place in her Novice Junior Lyrical Duet, as well as High Gold, First Place in her Novice Large Group Jazz Dance. 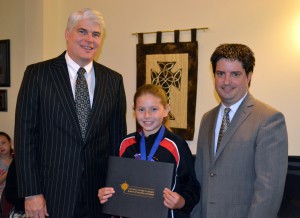 Derek, Caleb and Seth travelled to Kitchener, Ontario to compete in the Ontario Technological Skills Competition. Derek received a bronze medal in cabinet making, and Caleb and Seth placed tenth out of 47 teams in the team carpentry event. 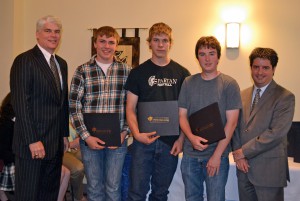 Ann Jackson is a leader in the environmental stewardship initiatives which take place at St. Thomas Aquinas. Lead Teacher for the SHSM Environment program, Ann engages students to be involved in many events including community and shoreline clean-ups, tree planting through the “Trees for Tomorrow” campaign, and a major community event called the Living Locally Fair which is held in collaboration with the Horticultural Society. In 2013, St. Thomas Aquinas was one of three schools across Canada to receive the EcoCanada National Green High School Award; a prestigious honour which can be attributed to the many programs and initiatives developed by Ann. 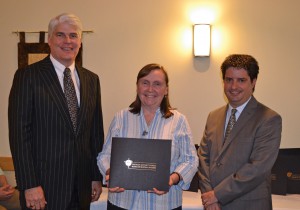 This group of students participated in Le concours et festival d’art oratoire, which is an annual public speaking event for students in grades 4 through 12, studying French as a second language in Ontario schools. Le concours et festival d’art oratoire is an opportunity to integrate public speaking into regular classroom activities, and to involve community members outside the classroom for judging and administration of classroom and school level events. Each student won first place in his/her category at the Board level competition that was held in early April. All students went on to participate at the provincial event in Toronto in May.

Michael Blouin, drama teacher at St. Michael CHS, and grade 12 student Elizabeth Friend, co-wrote and co-directed the school play entitled “Bully,” which captivated audiences with a powerful message about the negative impact of bullying. The two successfully developed a script which captured and engaged cast, crew and audience alike. Mr. Blouin is also to be commended for the countless hours that he devoted to guiding and developing the students’ abilities and confidence as they prepared for this important event. The St. Michael community is extremely proud of Mr. Blouin and Elizabeth Friend for their work on this original play.

Tamara Hamilton, a grade 12 student at St. Thomas Aquinas Catholic High School, was recently selected as an Ontario 4-H Ambassador to represent the organization across the province for 2014. Tamara is one of six youth to have earned this position. The 4-H Ontario Ambassador program provides youth with advanced level training in leadership, citizenship, communications and public relations. Ambassadors put their energy and 4-H experiences to work recruiting new members and sharing the 4-H story. 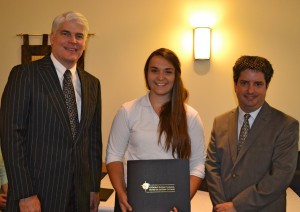 Kyla and Charlotte coordinated a “Soles for Souls” campaign at Mother Teresa Catholic School, which took place throughout the Lenten season. Although the project was connected with their Girl Guide Group, it ran at the school and was supported by the school community.  The girls collected 392 pairs of gently used shoes that were organized and sent to Africa for disaster relief. 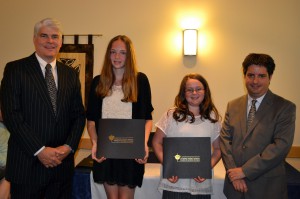 Mr. Bortolussi’s replication of the Trench Warfare used in WWI has brought a chapter of our Canadian history to life for our grade 10 History students. The level of student engagement and excitement was remarkable for this project. Mr. Bortolussi’s commitment to student success shone through in this hands-on project at St. Michael Catholic High School, which attracted national media recognition. The students acknowledged that this activity is something that brought the curriculum to life for them and it is an experience they will never forget. The St. Michael community is proud of Mr. Bortolussi’s creative approach to teaching students about important events from the past. 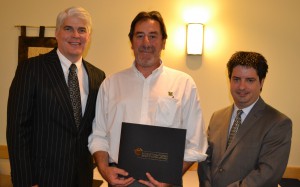 Director of Education, Wm. J. Gartland, expressed his gratification, “It is always a joy to come together to celebrate the unique gifts of our students and staff, and their successes. I am very proud of their accomplishments.”

Board News
No comments
Previous post:
Students from Immaculate Conception Raise $800 for CHEO
Next post:
Kids Plus Accident Insurance