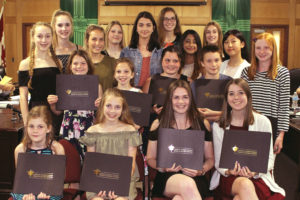 Each year, the CDSBEO honours deserving students and staff through the presentation of Certificates of Appreciation. Awarded to remarkable persons with outstanding successes, the certificates were presented to 18 students at the June 19th Board meeting. The following are this year’s award recipients:

Abby Jurchuk, Holy Trinity Catholic Secondary School
Abby is an accomplished weightlifting and CrossFit athlete, who competes at the provincial and national level for weightlifting. She has dedicated herself to the sport since the age of 12. In January, Abby won a bronze medal at the Canadian Junior Olympic Weightlifting Competition in Halifax, Nova Scotia. In 2017, Abby won a silver medal at the same event.

Aubree Bowes, St. James the Greater Catholic School
Aubree Bowes is a grade 2 student who has shown exceptional talent in writing. As part of her work for a French poetry unit at school, Aubree wrote several poems which were submitted for consideration to the OECTA Young Authors Awards. Aubree’s poem was selected in April by the Provincial Selection Committee, and her work has been published in the 2018 Young Authors Awards compilation.

Brooklyn Jordan, St. John Catholic Elementary School
After participating in the St. John Catholic High School’s annual Relay for Life in May, and being so touched by the experience, Brooklyn felt that she wanted to do more to help. Brooklyn took on her own initiative to make and sell bracelets, with all proceeds going to Relay for Life. Brooklyn is a very caring person who makes a difference among her peers and within her school community.

Victoria Nichols, Notre Dame Catholic High School
Victoria has been a dedicated highland dancer from a very young age. This year, Victoria placed 7th in the Scottish Open Championship in Dunoon, Scotland; placed in the top 6 in the Commonwealth Championship in Stirling, Scotland; won first place at the Loch Norman Carolinas Open Championship in Charlotte, North Carolina; and represented Canada in the Basel Tattoo musical event in Switzerland, as part of the Canadiana Celtic National Dance Team.

Lisa Ding and Mahi Patel, Holy Trinity Catholic Secondary School
Lisa and Mahi participated in the 2018 United Counties Science Fair. The girls grew a bean plant under various light conditions, exploring the circadian rhythm of the plants. An environmental chamber was used for the experiment, and the girls were required to take daily results (both qualitative and quantitative) in order to fully explore their topic. Their project won the following list of awards: Outstanding Research Award, St. Lawrence College Health & Sciences Trophy, and the Rotary Club Cornwall Best Junior Trophy. The girls moved on to the National Science Fair in Ottawa, Ontario.

Angelina Polegato, St. Mary-St. Cecilia Catholic School
Angelina is a grade 4 student and competitive gymnast. This year, she competed in three qualifying events for the season: Envol 2018, where she placed 2nd, Woodbridge Provincial qualifier, where she placed first, and lastly at the Ottawa Gymnastics Centre Qualifier, were she placed second. Of 24 provincial athletes in her level and age division, Angelina held the sixth highest score. At the provincial championships, Angelina finished in tenth place. She also travelled to Boca Raton, Florida for the Florida Crown Championship, where she competed in a level 7 open age session, placing first all-around.

Lauryn Roy, St. Mary-St. Cecilia Catholic School
Lauryn began gymnastics less than three years ago, and has only been competing for the last two seasons. She began in level 3, and is now at level 5. After all of the qualifiers for this season, Lauryn sat at number 1 in Ontario for her age and level. Lauryn competed in the Provincial Championships in May, in London Ontario.

Maggie Shaw, St. John Catholic Elementary School
For the last four years Maggie Shaw has been inspired to help others and to give back to her community. In doing so, she has raised $5,000 that has been dispersed to various families in need or community organizations that support families. Three years ago, she helped to organize a school wide skating party to raise money for a fellow student who was terminally ill. Last year, Maggie organized a church and school parish event to support a former student of St. John Elementary who was battling cancer. This year, another fundraiser was organized that saw the proceeds go directly to Ronald McDonald House.

Isabelle Georgeadis, St. John Catholic Elementary School
Isabelle is a grade 6 student who recently raised $1,200 to shave off her long hair. She generously donated the funds to the Children’s Wish Foundation of Ontario, and to the Cadets association to which she belongs. Congratulations Isabelle on making a difference and demonstrating to your classmates how important it is to give back to others.

Marie-France Pilon, Holy Trinity Catholic Secondary School
Marie-France worked all year developing makeup, costume and hair design for the Holy Trinity Catholic Secondary School entry into the National Theatre School Drama Festival Provincial Showcase. She, along with her partner Jasmin Virtanen, won the award for Makeup Design from the provincial adjudicator for their efforts in bringing stage characters to life. 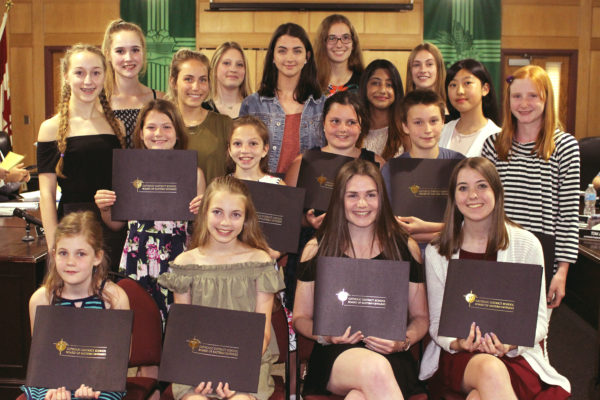