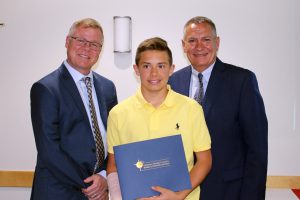 Each year, the CDSBEO honours deserving students and staff through the presentation of Certificates of Appreciation. Awarded to remarkable persons with outstanding successes, the certificates were presented to 24 students at the June 18th board meeting. The following are this year’s award recipients:

In addition to having excellent grades, Sarah is a dedicated competitive rugby player. She travelled to Las Vegas at the end of February to compete at the HSBC USA Sevens Rugby Invitational in Las Vegas, which is the premier amateur rugby event in the United States. It is also is the largest rugby tournament in North America. Sarah represented the Ottawa Ospreys Rugby Club and the Eastern Ontario Ruby Union.

Addyson has been a dedicated dancer from a young age. This year, Addyson was invited to audition for the Canadian National Dance Team, and has been offered a spot on the team representing Canada at the Commonwealth Cup Dance Championships in July, which takes place in Sun City, South Africa. The Commonwealth Cup Dance Championships is a biannual event that convenes dancers from all Commonwealth nations to celebrate excellence in dance.

Elizabeth is a grade 9 student at Notre Dame Catholic High School who works very hard to maintain excellent marks in all of her classes while training 7 days a week at her dance school. This past year, Elizabeth has competed at the provincial and national level. In addition, Elizabeth earned judges points at the Ontario Championships, which means she was ranked in the top 6 in the province, and will compete in the World Championships in Scotland this summer.

Eva, Iris, Reegan and Taylor are students who work very hard not only in their studies, but also in their dedication to their beloved sport of hockey. The girls are members of the Smiths Falls Cubs Atom A team, who came second in the province of Ontario in their division. The team also placed second in the International Silver Stick tournament, which is at the highest level possible for girl’s hockey.

This group of students were part of a national initiative called “Imagine a Canada” which called on young Canadians to demonstrate their vision of what reconciliation could be through art, poetry, music, writing, and other creative endeavours. The project was launched by the National Centre for Truth and Reconciliation. These four students cooperatively created a visual representation of their vision of reconciliation. The painting was designed with the help of two Indigenous community partners, who helped the students with symbolism and shared their insights into Indigenous spirituality. The painting was chosen among thousands of submissions from across Canada, and the group was invited to speak about their art at the Imagine a Canada 2019 national event in Winnipeg.

Alexandre, Joy and Abigail represented the CDSBEO at the Provincial “Festival d’art oratoire” at York University’s Glendon College in Toronto, on May 4th, which is an annual public speaking event for students in grades 4 through 12 studying French-as-a-Second-Language in Ontario schools. Each student won first place in his/her category at the Board level competition that was held in early April. Joy represented the board in the Extended French – grades 4 to 6 category, Alexandre represented the Board in the French Immersion – grades 4 to 6 category, and Abigail represented in the Extended French, Grade 7 and 8 category.

Calum has been selected to participate in a ten day leadership opportunity that gathers students from more than 145 countries. Hosted in New York City and Washington, DC, students who attend the Global Young Leaders Conference will examine diplomatic, social, and economic policies as well as visit international embassies, hear from world leaders such as the head of the United Nations, the World Bank and Amnesty International. Calum is an excellent student and a very worthy candidate to participate in this experience.

Paige, Angelina, and Lauren and three very accomplished gymnasts. All have competed in the prestigious provincial competition. Paige in currently in her first year of competitive gymnastics, and she has worked very hard to make it to provincials just a few weeks ago, and she placed impressively at all of the qualifiers. Lauryn is in her third year of competitive gymnastics, and this year she has competed in provincials, as well as one international competition. Angelina is also in her third competitive season, and has competed as a Junior Olympic Level 8 athlete in the 11-12 age division of the Gymnastics Ontario Competitive Program. At the 2nd Annual Simone Biles International Invitational, Angelina came second all-around in her session, competing against some athletes who have achieved top 100 ranking in USA Gymnastics.

Brooke, Shaye and Ella are members of the Smiths Falls Novice C team, who recently won a bronze medal and the Ontario provincial championships. The girls have a love for school, and hockey. They are exceptional students who excel at everything they set their minds to, and there is no doubt that they will continue to reach for the stars both on and off the ice.

Wyatt Warner is a respected part of the St. Andrew’s community as he leads through fair play, integrity, inclusivity and empathy, promoting active healthy living. An all-around athlete, Wyatt has had much success in many sports including cross county, where he has won multiple championships, and in basketball, soccer, volleyball, soft ball, and ball hockey, where he has been a finalist and gold medalist at several competitions. Wyatt’s beloved sport however, is hockey, which he has played at the AAA competitive level for five years. Wyatt has not only been the lead scorer and Assistant Captain this season with the Eastern Ontario Wild AAA Pee Wee team, but is also a regional gold AAA team member, MVP Pro Bauer Shootout All Star, and has played on the all-star team at the Bell Canada Cup.

Donovan is a grade 10 students at St. Joseph’s CHS, who is also a very accomplished dart player. Donovan has won Junior Boys Bursary Shoot and Junior Boys Doubles in the National Darts Federation of Canada 2019 Youth World Cup Qualifier. He has also helped Team Canada win the Nodor Cup, coming in second with mixed doubles at the World Master Qualifier. As a result of his recent win at the World Cup Qualifier, he will be joining three other youth on the boys’ Canadian Youth National Team at the world tournament taking place this October in Romania. Donovan will also be travelling to England in October to compete in the Ninmau World Masters tournament.