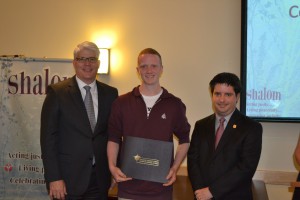 Each year, the CDSBEO honours deserving students through the presentation of Certificates of Appreciation. Awarded to remarkable students with outstanding successes, the certificates were presented to nineteen students at the June 19th Board meeting. Pictured below are each of this year’s award recipients, with Director of Education, Wm. J. Gartland (left) and Board Chair, Brent Laton (right):

Alison will travel to Africa at her own expense next November with OK Clean Water; an organization that funds water projects in the Kumbo region of Cameroon.

Alison spearheaded the Lenten project at St Mary’s, inspiring her peers to raise funds for the Cameroonian water project. She networked with OK Clean Water, helped arrange for speakers and organized fundraisers. In total, the students raised $1260 toward the project through her leadership. 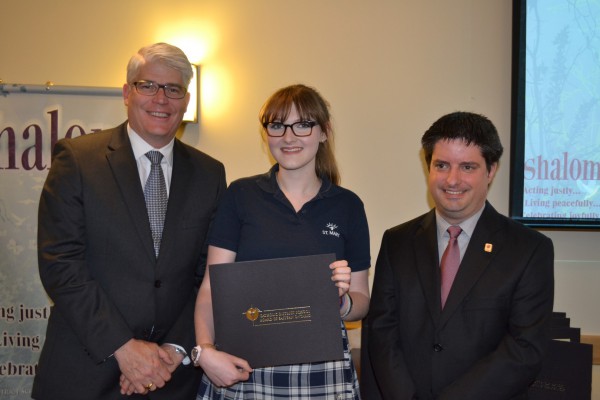 Nathan is a member of the Cornwall Weightlifting Club. In December 2012, Nathan won gold at the Ontario Junior Weightlifting Championships held in Toronto.  He was successful in the under 62 kg weight class event.

In March 2013, Nathan won gold at the Mini-Hercules (17 and under) Weightlifting Competition, also held in Toronto. This was an open meet, and Nathan was successful in the under 69 kg weight class event. 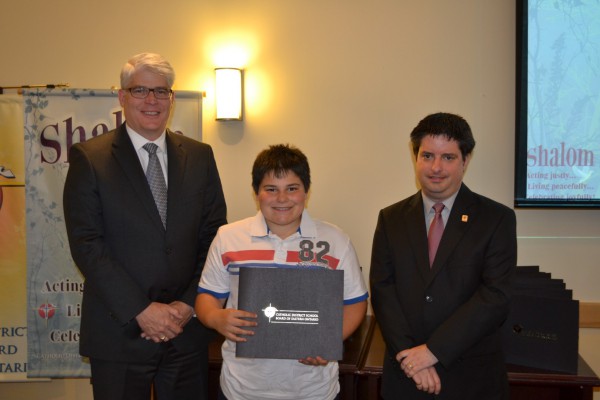 Tyler became a local hero this winter, when he came to the aid of an elderly neighbour that had fallen outside. Tyler was outside when he heard the cries from the distance, and got help from his father. Stranded in the cold for almost 72 hours, Elsie Knight suffered a broken leg, and was taken to hospital and also treated for hypothermia.

After being the lead story on CTV New Ottawa, Tyler received local recognition from various South Dundas organizations, and from M.P. Guy Lauzon. He remains humble, even though he has become a local hero. 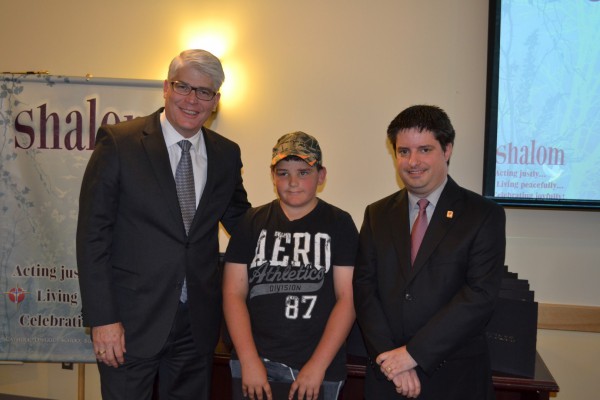 Savannah joined Olympia Bowl’s Bantam Girls’ Bowling Team this past year. She starred in Vancouver, at the Youth Bowling Council Nationals, with an average of 171.86 over 21 games.  Her team mates: Alyssa MacGillivray averaged 157.43, Chloe Russell averaged 163.90 and Shayla Lascelle averaged 154.57. With these impressive scores, her team won gold at the competition.

Savannah is hard working at school maintaining levels 3 and 4 in all subject areas.  She is a quiet girl and a great friend to all. 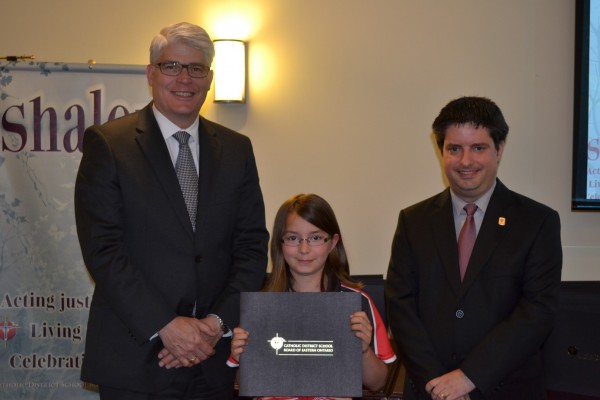 Alexandra and Jake placed first in the competition. The duo dedicated numerous hours after school practicing the recipes, reviewing the food theory and perfecting their skills.  This is a remarkable achievement, for which they should be celebrated. 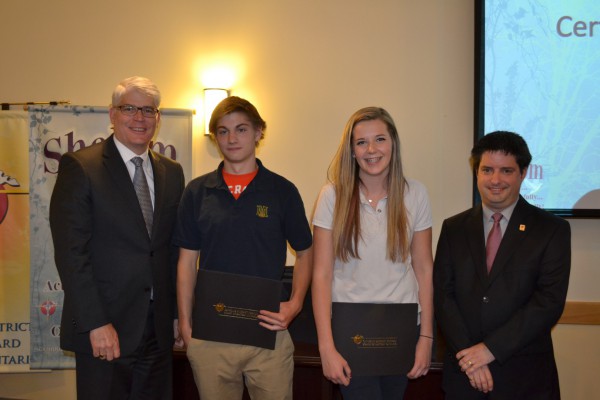 Kylee is a member, and leader, of the Holy Trinity “We Day” team that raised over $5000 for the school’s clean water project in Haiti, through the organization Free the Children.

Kylee has been a member of the Social Justice League throughout her high school career. She has a great leader in the school in various projects, including our Clean Water Project, a ThinkFast Leader, and also spends many hours at our local Agape Centre, which runs a soup kitchen and food bank. She has attended We Day in Toronto and Gatineau through Free the Children, and is committed to social change in our school and community. She is also an active member of her local church youth group “Ignite” which helps to spread the Gospel message to young people.

Kylee is also an active member of the Cornwall Chapter Canadian Cancer Society. She has been involved with initiatives such as the smoke free movie nights in Cornwall, Tanless Prom, and the Relay for Life event that will be held this June 7, 2013.

Kylee has always placed others first in everything she has done. She has accomplished more than her mandated 40 hours of community service because of her genuine love of people and desire to be the change in our community. 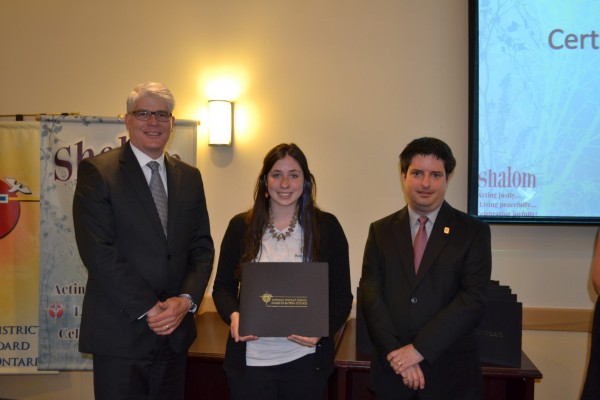 From a young age Jaden has always had a great talent, love and passion for dance, and she is always striving to improve. Jaden started dancing at age 4 with Farrah Dance Works. Her first year dancing she received the Rising Star Award from the dance school.

In 2010, Jaden was invited to the competitive team and offered a solo at age 5. She performed her solo and received the 3rd place overall trophy in the mini division.

In 2011, Jaden was invited to return to the competitive team. She performed a solo and received 1st place along with the Oscar performance award trophy.

Jaden performed in the Ballet Jorgen, Canada’s traditional treasure The Nutcracker, at the Shenkman Arts Centre, on December 17 and 18th, 2012. In preparation for her role as a Frog, Jaden rehearsed every Sunday for 6 weeks and attended a Master Class taught by acclaimed choreographer and Artistic Director, Bengt Jorgen.

In January, Jaden auditioned for L’École supérieure de ballet du Quebec. It’s the only institution in North America to provide a professional ballet program entirely in French. She was successful and was asked to attend a 2 week program in August.

This year Jaden is currently working hard on this competitive season and is always looking to improve and push herself and achieve her goals. 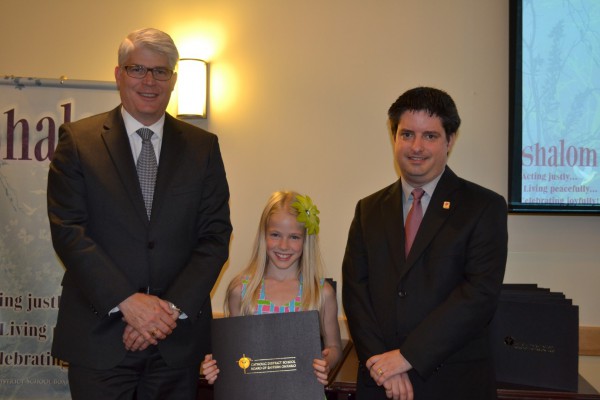 This group of students participated in Le concours et festival d’art oratoire, which is an annual public speaking event for students in grades 4 through 12, studying French-as-a-second-language in Ontario schools.

Le concours et festival d’art oratoire is an opportunity to integrate public speaking into regular classroom activities, and to involve community members outside the classroom for judging and administration of classroom and school level events.

Each student won first place in his/her category at the Board level competition that was held in early April. All students went on to participate at the Provincial event that was held in Toronto in May, and co-sponsored by Canadian Parents for French (CFP) and the Ontario Modern Language Teacher’s Association (OMLTA). 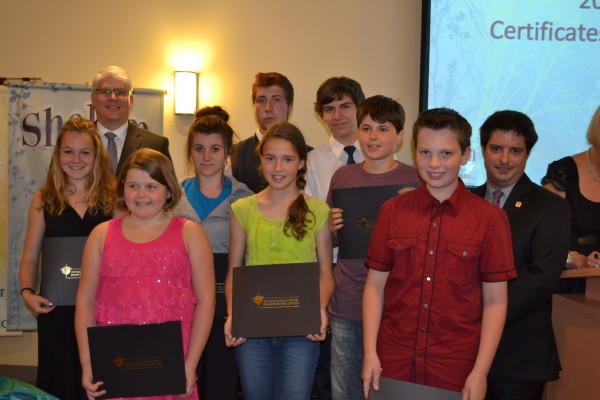 Students completed an application package, and competed with over 200 applicants from across Canada, to be selected to participate in this prestigious program. 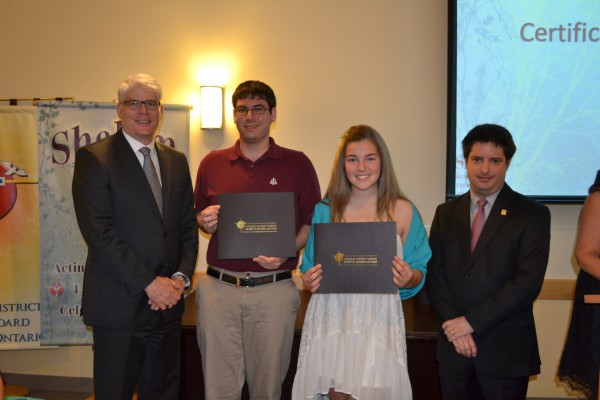 Justin is a member of the Canadian Morgan Horse and Miniature Horse Association. Has earned many provincial and national awards in numerous categories for the youth 14-17 age group.

Justin has trained extensively in horseback riding, and has earned many awards. In 2012 alone, Justin earned 4 national championships, and 7 provincial championships, in a variety of categories.

Justin was unable to attend the award presentation, however, his Grandmother attended, and kindly accepted on his behalf. 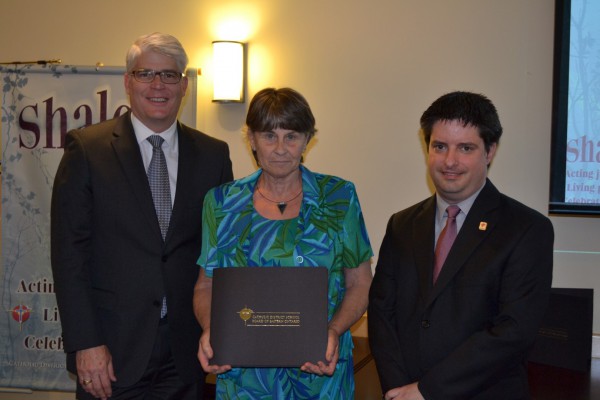 Jeff is a very committed and successful figure skater/ ice dancer.  He trains up to 6 hours a day, while attending school full-time.

In 2011, Jeff earned 2nd place at the Canada Winter Games, and in 2012, Jeff won 3rd in Ice Dance at the National level competition.

In February 2013, Jeff was chosen to represent Canada to participate in the Ice World Seminar, in Osterhoff Germany, where he was coached by world champions. 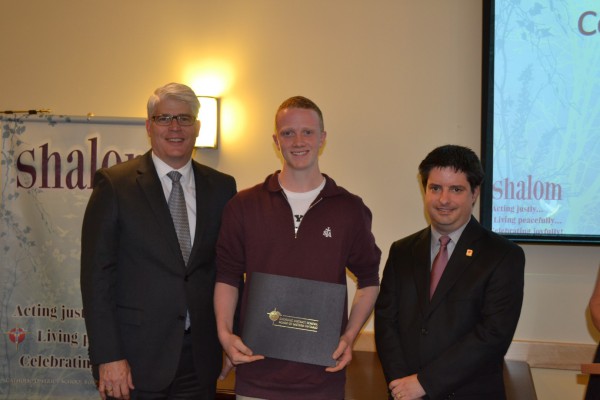