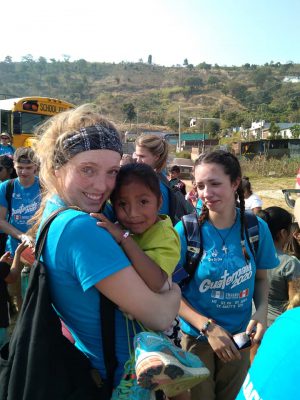 This past February two groups of 30 students, were given the opportunity to travel to Guatemala to participate in the annual CDSBEO exposure trips. The students spent most of their time in Guatemala in a small village called Anibal Archila, working in the community. Over the course of their stay, the students did work to help support the community, including assisting with the construction of a road with interlock stones, which will help to reduce mud in the wet season and reduce dust in the dry season.

Though both groups essentially had the same itinerary each student came back with different life changing memories and newly developed values.

“The main goal was to begin building the final roads in the village and to paint the over one hundred houses for the habitants of the village,” explained Catholic Student Trustee Josephine Purcell, who travelled to Guatemala with the group.

“Each group brought along plenty of donations which were used to make care packages to share with those in the village that need it the most.”

“The students and supervisors decided to bring some of their money together and make a donation which will help improve the clinic,” noted Purcell.
Unforgettable relationships were formed between the students and the families in Anibal Archila from locals who demonstrated sincere gratitude for the work being done.

“The minute we arrived we were welcomed with a great celebration that included music, refreshments, and fireworks. They willingly shared many parts of their culture with us even though we had just met them.”

Trustee Purcell explained that leaving the village was an emotional day, but that it proves how impactful the experience is, because of the bonds made with the people of the small Guatemalan village. A video was shown which included additional testimonials from many students who expressed their gratitude and described the positive experiences in Guatemala.

“On behalf of everyone who participated in this trip, we would like to give our thanks to the many staff of CDSBEO and One by One, that made this incredible trip possible.”

Board News
No comments
Previous post:
Catholic Education Week
Next post:
Chair Lalonde appointed member of Council of the Ontario College of Teachers